THE DOLLMAKER Excerpt: A Close-Up of The Dollmaker’s Handiwork 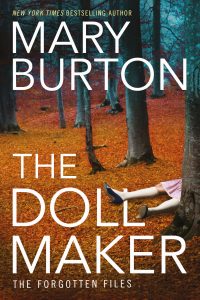 The Medical Examiner Arrives at the Site of a Killing

Julia Vargas approached Dr. Kincaid and Tessa. They listened to the agent give her report on the body before moving toward the crime scene tape. When they ducked under it, he followed.

Dr. Kincaid extended her hand to Martin Thompson and smiled as she introduced Tessa. “Dr. McGowan is a forensic pathologist. You’ll be seeing more of her.”

Martin shook her hand and only tossed a quick questioning glance at Sharp. “Welcome.”

If Tessa read Martin’s questioning gaze, she gave no sign of it. “Thanks.”

The older man’s normally banal expression actually softened, and he held her hand an extra beat. “Glad to have you on the team.”

Sharp caught a couple of young officers looking at Tessa. Their gazes weren’t curious, but lewd. They didn’t realize Tessa was his wife. A primitive impulse demanded he punch each guy in the face.

“An early-morning jogger. He said he didn’t touch her. Thought she might have been a mannequin at first. He called the cops right away, and we had a first responder here within five minutes to secure the scene.”

“May I touch the body, Martin?” Dr. Kincaid asked.

“Yes. I’ve collected every bit of evidence I can find, so the body is ready to remove,” Martin said.

Dr. Kincaid knelt and with a gloved hand touched the victim’s face, circling her finger around the red circle, a cartoon version of a blushing cheek.

“It’s a tattoo,” she said, hints of surprise in her tone. “And judging by its color and skin texture, it’s recent. I’d say she only finished healing days ago.”

“Have either of you ever seen anyone with this kind of tattooing?” Julia asked.

“Some of the cultures in Asia tattoo the females’ faces, but that’s dying out,” Tessa said.

“I’ve seen women who’ve had permanent makeup applied to their faces. Eyeliner, blush, even lip color,” Dr. Kincaid said. “Even had a woman on my table who had her boyfriend’s name inked on her forehead. But a doll face is a new one.”

Tessa pushed up the sleeve of the oversize doll dress. “The white stippling tattoo work that’s on her face also extends from her fingertips to her wrists. Her eyes are expertly lined in a dark ink, and very precise freckles dot her cheeks.” She touched the victim’s mouth. “The red heart-shape tattoo here redefines the shape of her lips.”

“She’d have to be out cold, otherwise the work couldn’t have been done to her face,” Vargas said.

“The injection site isn’t infected, and there’s no bruising, suggesting whoever inserted a needle in her arm knew what they were doing,” Tessa said.

Sharp folded his arms, trying to envision the woman before this work was done, but he couldn’t see past the ink.

Tessa pulled the sleeve back over the victim’s arm. “Look at the detail around her eyes,” she said. “It’s hard enough to do with pen and ink, let alone with a tattoo needle.”

“Only a monster would do this to an unwilling woman,” Vargas said.

“I didn’t say the person who did this was sane,” Tessa said. “I was simply commenting on the skill.”

He watched as Tessa absently rested her hand on the victim’s arm as if assuring her it would be okay, and she was now in good hands. He suspected if he weren’t standing there, Tessa would have spoken to the victim, issuing words of reassurance.

He cleared his throat. “Dr. Kincaid, do you have any idea how she died?”

Dr. Kincaid checked the victim’s neck for signs of strangulation and tipped her body forward to look at her back. “Dr. McGowan, what’s your opinion?”

Frowning, Tessa studied the body. “There are no signs of trauma on the body. We’ll have to check her blood levels for signs of asphyxiation and drug overdose.”

“Her shoulder blades and the back of her hands are discolored.”

“What does that suggest, Dr. McGowan?” Dr. Kincaid asked.

“After her heart stopped pumping, the blood settled in the lowest part of her body, which was her back.” She rolled down the knee socks and inspected the back of the victim’s calves. They were also bruised. “If she’d died here, her shoulder blades would not be discolored.”

“On her back,” Vargas said, shifting as if uncomfortable with the idea. “I don’t want to think what that suggests.”

“We’ll determine if there was sexual activity,” Dr. Kincaid said. “Though I might not be able to determine if it were pre- or postmortem.”

Dr. Kincaid ran her hands over the dead woman’s arm. “The skin is smooth, and there are no signs of hair on her arms or legs. She’s been waxed recently.”

“She didn’t die here,” Dr. Kincaid said. “But that doesn’t mean she was murdered. She could have overdosed.”

“The second party panicked,” Vargas said. “She could have been into some kind of weird shit, and it went sideways. Whoever she was partying with dumped her here.”

“She wasn’t dumped,” Sharp said. “She was carefully posed.”

Sharp shook his head. “Or a final statement from the killer. Right now, I don’t know. We’ll let the evidence lead us.”

“How long would it take to tattoo her face and arms?” Vargas asked.

“I can’t speak to how long the tattoo work took,” Dr. Kincaid said. “There are no signs that infection ever set in. That means the wounds would have to be washed, there would have been extensive bandaging of her face and arms, and the dressings would have to have been changed daily to avoid infection.”

“We’re looking for someone who could have gone missing a month ago?” Sharp asked.

Tessa studied the back hem of the victim’s doll dress. “This appears to be a bloodstain,” she said.

Martin nodded. “I saw that. Don’t know if it’s her blood, but it’s marked for DNA testing.”

Needing a moment, Sharp turned from the scene and walked back to his car. He dug his cigarettes out of his pocket as reached for the door handle. But as he shook loose a cigarette from the pack, he felt Tessa’s gaze on him. He let the packet fall back in his pocket. “What is it, Tessa?”

For a moment she didn’t speak, and then in a voice that was both tender and harsh, “You’re thinking about Kara.”

He flinched at the sound of his sister’s name. Their last big fight was over Kara. He’d been so angry when she’d tried to talk to him about letting his sister go. He’d blown up at her, dumping all his anger for his lost sister on her. Tessa had absorbed his pain to a point, and then she’d gotten angry. Two days later she was on a plane to Southeast Asia.

“So you’re psychic now?” he asked.

“I don’t need to read your mind.” An edge honed the words, telling him she would not tolerate his temper. “I know you. She’s never far away when you’re investigating a case.”