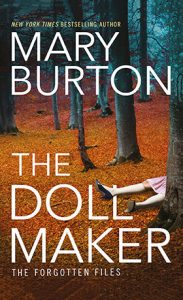 One week to go until the November 15 release of The Dollmaker, the second of my The Forgotten Files novels.That’s time enough for one more Flash Giveaway starting now and ending midnight on Wednesday, 11/9. Enter for a chance to be the winner of an early copy of The Dollmaker.  Meet Tessa, Dakota and a killer whose penchant for real life—if not live—dolls accelerates as each deadly case emerges.
a Rafflecopter giveaway 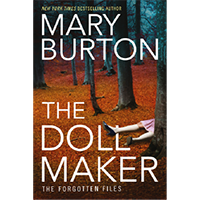 Tessa and Dakota meet for the first time since their separation.

“Why the meeting, Tessa?”

“I wanted to let you know I’m back in Richmond. I’ve applied for a yearlong fellowship at the medical examiner’s office. In fact, Dr. Kincaid just offered me the job. I start in the morning.”

A muscle pulsed in his jaw. “She’s smart. Manages a good shop. Why tell me?”

Ice coated each word. He wasn’t attempting cordial. But then it had never been easy with him. “We’re going to run into each other. In fact, the medical examiner’s office has one of your cases on the docket for tomorrow.”

The muscle in his jaw pulsed again. “You could have told me all this in a text.”

As he sat back, his jacket opened a fraction, offering a glimpse of his badge clipped to his belt, inches from the grip of his weapon. He waited.

She tucked another strand of hair behind her ear. “I understand this victim is young.”

He impatiently tugged at the edge of his jacket. “When you officially start, we’ll talk about it.”

Old frustrations stirred, and she remembered he could be abrupt, his tone blunt when he was upset. She knew he was angry with her. She’d blasted out of his life on a rush of emotion and little thought.

Now, she wanted to say the right words to mend a once-strong connection now shattered into so many pieces, words alone felt inadequate.

Dakota’s question was as piercing as a honed blade. “So that’s it? You wanted to give me a heads up?”

“That was part of the reason.”

“I wanted to see you. To see for myself you’re doing okay.”

He shook his head, as if he were bracing for a second shoe to drop.

“I also wanted you to know I remembered today is Kara’s birthday. I haven’t forgotten.”

“She was my friend, too. What happened to her changed my life as well.” Her thumb rubbed the underside of her ring finger as if expecting to feel her wedding band.

“Yes.” She’d hoped mentioning Kara would chip away at the wall between them, but it only added more bricks. “Sorry, I didn’t mean to rub salt.”

A weary sigh leaked from his lips. “I assume you’re now making small talk and screwing up the courage to talk about a divorce.”

Their broken marriage dangled between them like glass shards. Hardly anyone would have noticed any hope glinting around the jagged edges. “No, I’m not.”

This was the moment she’d rehearsed a hundred times on the long plane ride home. “I’m not filing the papers.”

His gray eyes narrowed. “You want me to?”

Wariness flashed as his eyes narrowed. “Why not? A clean break means you can get on with your life.”

If this had been a tug-of-war game, she’d have been digging in her heels. “Is that what you want?”

Staring. Silent. Still. He was giving her no glimpse of his thoughts. She’d have to work for every inch of progress.

“I’ve done everything I can think of to get free of you. I was sure ten thousand miles would do the trick. But no luck.” As the words rushed over her lips, she regretted them immediately.

A cold chill swept over her and threatened to scatter whatever hopes she’d painstakingly collected over the last weeks as she continued, “I thought eight months apart would mellow us both.”

“I haven’t changed and neither has my job, Tessa. It never will. I don’t know why you imagined I’d change.”

Shaking his head, he rose as if he could no longer stay still. “Do yourself a favor and move on with your life. File the papers, and I’ll sign them.”

She stood quickly, again bumping the table, sloshing more coffee. As he turned away, she fired back, “I never figured you for a chicken, Sharp.”

His face in profile now, a muscle again pulsed in his jaw. He might recognize her outburst as one of the investigative techniques he used interviewing a hostile witness, but that didn’t mean he was immune when the tables were turned. “Provoking my temper won’t work, Tessa.”

“Figured you were more of a fighter,” she pressed. What the hell did she have to lose now? “Never pegged you for a quitter.”

Unruffled, he reached for his sunglasses. “I’m a realist. We are not suited for each other. I know. You know it.”

She moved a step closer to him, knowing the sunglasses were one of his tells. He put them on when he was rattled. She’d hit her target. “I’m not filing papers.”

“And then what? We remain in limbo?”

“No. We figure it out. We make our marriage work.”

Enter to Win One of Two Copies of The Dollmaker

Two weeks and counting down until the November 15 release of The Dollmaker, the second of my The Forgotten Files novels. I’m excited to soon be introducing everyone to medical examiner Tessa McGowan, her not-yet-ex, Virginia State Police Agent Dakota Sharp, and the serial killer whose twisted pursuits surprised even me. Want to meet them sooner? Enter and you may be one of two winners. Hurry. The Dollmaker Two Weeks, Two Books, Two Winners Flash Giveaway ends Wednesday at midnight.

“Mary Burton – petite and soft-spoken – makes her living murdering people.” That’s the first line of The Virginian Pilot story on New York Times bestselling author Mary Burton. Read the rest for more about Mary and to get the scoop on the Hampton Roads Writers Conference. 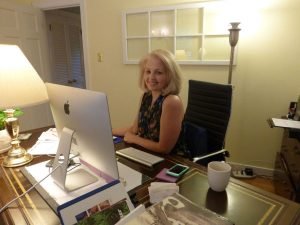