Forensic Friday—Set the Stage: Wednesday I Went to Jail

Forensic science and details of how law enforcement operates play key roles in my police procedurals, and I’ve always believed that actually experiencing much of it, as I have at Writers Police Academy and elsewhere, has enhanced my writing.

I find the same to be true of setting.   It helps me tremendously to have walked around a city or to have visited the types of locales I’m planning to include in a story, even when I’m going to be making them up.  Getting the setting right is very important.  Whether I’m describing the inside of a  courthouse, a squad car or a jail, I try to be as accurate as possible.

Which is why I went to jail the other day. The visit was courtesy of the Richmond City Justice Center, which gave Sisters in Crime Central Virginia the opportunity to tour and learn more about the facility and its people, including  a rundown of the procedures prisoners go through when they first arrive. 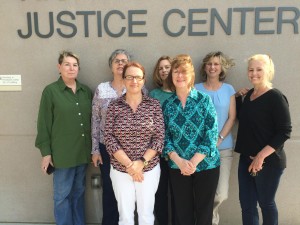 The gang from SINC Central Virginia happy to know we can leave at any time.

Worth pointing out is that some of us confuse the terms jail and prison.  Jail is a short-term incarceration—less than three years.  Inmates stay in jail while awaiting their trial and sentencing and then after that, they are transferred to a prison for the term of their incarceration.

The Richmond facility is new and houses up to 1000 male and female inmates, called “residents” by the staff. These individuals have been arrested in Richmond by law enforcement authorities including the Richmond City Police, FBI, Virginia Commonwealth University Police and J. Sergeant Community College Police.

When prisoners arrive, they’re searched, given a Breathalyzer, their money is loaded into an account and a nurse medically assesses them.  If the magistrate does not set bond or if it isn’t paid, an individual’s threat level is then determined and he/she is assigned a uniform based on that threat level.  They are then assigned a spot among the thirty-two housing units, a.k.a. pods, which hold from twelve to seventy-two people.

While there, we also learned about the Center’s program, REAL (Recovering from Everyday Addictive Lifestyles), created by Director of Internal Programs Sarah Scarborough. Residents admitted to the 40-hour a week program complete classes such as remedial math, anger management and creative writing, taught by volunteers and staff.

Thanks to all at the City of Richmond Justice Center, in particular, Sarah  who showed us around and shared background and insights along with facts and figures.