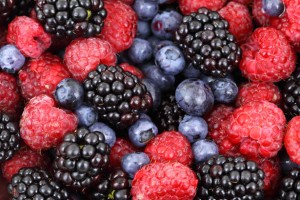 I was talking the other day about plans for Fourth of July weekend and a question up about about family recipes, which quickly took me back in time to July at my grandparents’ small farm in Roanoke, Virginia and Grandma’s  fried pies.

My grandmother always planned her meals around the seasons and at this time of year she and my grandfather had buckets of wild raspberries and blueberries to hand, so a berry pie was a natural in July. Grandma was great at making pies, though she loved to fry hers. In fact, my last conversation with her was about making pumpkin pie. She never really worked with a recipe but tossed in a little of this and that. That’s the beauty of a pie—you don’t need to be as precise as with a cake.

As the years have gone by, one thing that stays the same is that Virginia’s fresh berries and peaches are in abundance and, like my grandmother, I can’t resist using them. I do a bit of a modern take on her pies, using puff pastry, and — for Independence Day — arranging the berries in the shape of an American flag. I love that version and so does my family but still . . . hmm. It’s not quite Grandmother’s. So of course, I prepared both this week — my puff pastry berry pie and grandmother’s fried version. Nothing like getting a head start on the holiday weekend victuals.

Here’s how they turned out, along with the recipes. I hope you enjoy them. 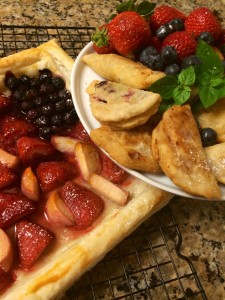 Cook in a preheated 350-degree oven for 20 minutes. Melt the apple jelly on the stove in a small saucepan and when the pastry is cooked brush the fruit with the melted jelly until it glistens.

Cut the butter into squares and then sprinkle the flour over it. Work the flour and butter together with a pastry blender or a fork and knife until it resembles cornmeal. Slowly mix in the ice water until the dough comes together into a ball. Go slow with the water because you might not need it all to finish the dough. Wrap and refrigerate for one hour.

Heat the water in a saucepan with the sugar. Mix the cornstarch in a separate glass bowl with ½ cup water until it dissolves and then mix this cornstarch mixture into the water/sugar mixture. Add in the, vanilla fruit and cook for about five minutes. Drain off the juices and cool.

Assembly
Roll out chilled dough and cut into circles. Fill each dough round with a little bit of fruit and then fold it over into a half circle. Pinch edges so they are sealed.

When all your pies are assembled, heat a pan with cooking oil (about ½ inch deep) and then gently lower the pies into the hot oil. Cook on each side for about a minute, flip and cook for another minute. While they are still hot, dust the fried pies with confectioner’s sugar.