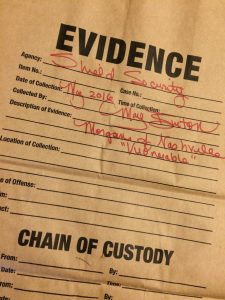 Tonight, this week’s evidence bag giveaway is just beginning. I’m sharing  another chance to win and debuting a new, exclusive to maryburton.com excerpt from The Shark, the first of my The Forgotten File novels!  I hope you enjoy it.

Again, if you gave it a shot last week and and didn’t win, take another chance. Enter below and you may be the one to receive the next evidence bag of books.

In the meanwhile, here’s Virginia State Police Trooper Riley Tatum and Agent Dakota Sharp on their way to question the parents of a victim . . .

As they drove in silence, she thought about the playing cards hidden in her house. A thousand miles and a dozen years separated her and the day someone had given her those cards. She had no forensic evidence or memories she could attach to the cards. And with Hanna’s adoption looming, just the suggestion of a link to a serial killer could derail the final judgment. Still, the cards couldn’t be ignored.

“Have you considered entering the murder in ViCAP?” she asked.

“The FBI database? Why?”

“The playing cards found with the victim are distinctive. The handwritten word Loser on each is a signature.”

He cursed under his breath. “Don’t make this more than it is.”

Gripping the wheel, she pulled herself up a little straighter. “I disagree. They have a distinctive look. I bet they’re custom made. It’s worth a shot.”

“Anything federal amounts to a shit-ton of paperwork.”

He groaned and rubbed his eyes. “You don’t want to deal with the feds.”

“But it’s the only hard evidence we have at the moment,” she coaxed. “You’ve got to admit the cards are different.”

He tensed as she sped up to merge into highway traffic. “The cards are unique.”

He glanced at her, eyebrow raised as if searching. “What aren’t you telling me?”