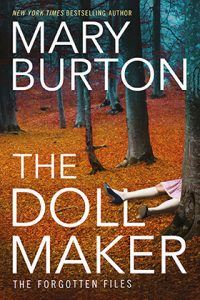 A tall, lean woman in her early thirties approached him. She was dressed in jeans, a loose T-shirt, leather jacket, and booted heels. Ink-black hair skimmed her jaw, a delicate cross on a chain hung around her neck, and a detective’s shield was clipped to her belt. Her lips were fixed into a grim line.

He recognized her. She was new to the Richmond division of the Virginia State Police, having transferred in from the Tidewater area.

Sharp pulled his badge from his breast pocket, held it up for her to see, and attached it to his belt. “Agent Dakota Sharp.

She extended her hand. “Agent Julia Vargas. Thanks for coming so quickly.” Her handshake was firm, her gaze direct.

Agent Vargas rubbed the back of her neck as she glanced back toward the body. “I received a call from the local deputy because this scene is so odd. One look and I knew I needed a second set of eyes.”

“Body of a young female. I’ve seen a lot of heinous acts, but this one takes the cake.”

“What’s different about her?”

She shook her head. “You’re going to have to see it for yourself.”

“Okay.” He tugged a set of black latex gloves from his pocket and slid them on over his hands. “Lead the way.” She turned toward the yellow tape, raising it to allow him to pass first. A ring of officers and forensic technicians parted as he approached.

For a moment, he simply stared at the scene. His brain didn’t quite process what he saw until he brushed away the shock and refocused.

Leaning against the tree was the body of a woman, dressed like a doll. White billowy dress, knee socks, shiny patent-leather shoes. However, it was her face and eyes that took his breath away. Her eyes were tacked open, revealing unnaturally large pupils staring sightlessly at him. Her face was painted white, cheeks tinted a blush red, with eyebrows arched in a thin line. The hair, twisted into twin braids, was a wig.

His gut clenched. When he spoke, his voice sounded ragged, rough.