Burning Down the House

In Be Afraid, Detectives investigate a murder scene in a home that seems to have intentionally been set on fire.  Burn patterns at an arson scene can tell the investigators a lot about the fire— how it was started, where it began and  how it traveled.  Often human remains can melt in such intense heat.  I was fascinated by some of the things I learned  at the 2014 Writers Police Academy. Not only did a fire investigator speak to us about fire, he took

us to a back lot where we were able to witness the controlled burn of a mock room. 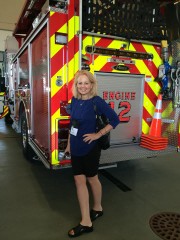 Me at Writers Police Academy 2015

Writers often think that when a room catches on fire there’s still time forcharacters to carry on long conversations— something I was guilty of in a rough draft.  In reality, fire moves very, very fast.  Our controlled burn roomwas consumed in smoke within minutes and completely destroyed in 12 minutes.

This conversaton from Be Afraid takes place between Nashville PD homicide Detective Rick Morgan and the arson investigator at the scene of the house fire where a body has been discovered.

Inspector Murphy shoved out a breath. “No doubt about it.” He pointed to several sections of the ruins that had all but disintegrated.  “Those spots are ignition points where our arsonist poured lots of accelerant, likely diesel or kerosene.  As you can see, we have multiple ignition points, but if you look over here where the body was found, there’s quite a bit of damage.  That area was the bedroom.”

Rick studied what had been the bedroom and could make out the faint impression of a body. High heat not only seared flesh, but melted the body’s fat and ate into bone turning it to ash and dust.

“At this point, I can’t tell you how the person died,” Murphy said. “Witnesses  tell me the house was vacant except for the stage furniture. A neighbor was keeping an eye on the house. I don’t know if this is a suicide or a murder. Can’t even tell you at this point if the victim was a male or female. The fire was deliberate and intended to obliterate the house.”