There are two types of strangulation. One is manual, using the fingers, another body part or an object such as a baton. The other is via ligature, which means using a rope, cord, scarf, really anything that can be used for tying or binding. 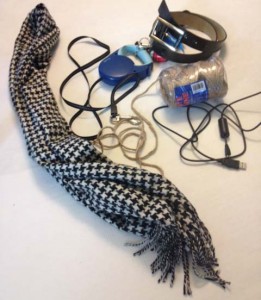 Strangulation as cause of death shows itself in many ways, the obvious being bruising and ligature marks, but also manifesting as damage to the larynx, the hyoid bone (between chin and thyroid cartilage) and other neck bones.

Investigators faced with a possible murder will know not to rely solely on ligature impressions to determine strangulation as these telltale marks can be made by similar means after death. They’ll look for additional evidence of asphyxiation and other clues the body can provide as well as circumstantial and, preferably, direct evidence.

Ligature strangulation is often the case in homicides but also occurs in accidents and suicides. One way of differentiating it from death by hanging is that the mark will most likely be lower on the decedant’s neck.  A ligature mark may not be present if a soft material is used, making it more difficult to determine if the death is a crime.

In this scene from VULNERABLE, Medical Examiner Dr. Miriam Heller walks Detectives Jake Bishop and Rick Morgan through her assessment of the visible marks on the body of victim Elisa Spence.

Dr. Heller moved to the body’s feet and uncovered them. Decomposition had discolored the soles and shrunk the skin around the toes’ cuticles, giving the impression that the nails had grown.

The doctor turned the ankle so that the heel was in plain view. “She has fresh blisters and abrasions. I took a look at her remaining shoe before I sent it to the lab and noted it was older, well worn. I wouldn’t think the shoes would have worn blisters unless she’d been on her feet a long time. There are also scratches on her upper arm that suggest she ran into something abrasive like a tree.”

Jake rested his hands on his belt. “Like someone was chasing her through heavy brush?”

“That would be my guess. Her shoes created the blisters and the branches scratched her face.” Dr. Heller arched a brow.

“One could assume she lost her other shoe while she running.”

“Scent dogs are combing the brush, but so far have not found it,” Rick said.

She moved to the head of the table and uncovered the girl’s face, also darkened and drawn from death. Her lips were pale, bloodless, and more scratches raked across the left side of her face. A purple ligature mark ringed the skin around her neck like a Victorian choker. “The scratches on her cheekbones are also consistent with running through the woods.” She lifted the head and turned it to the right, exposing the flesh under the left ear. “What does that look like to you?”

Jake leaned in to study the blue-purple marks. “Looks like bruises.”

“She’s got matching sets on the other side. The shape is consistent with fingers. Because they’re in slightly different positions, it appears whoever strangled her put hands on her neck several times.”

“Strangled her but didn’t kill her,” Jake said.

“That’s right. I’ve seen bodies marked like this before. They often indicate a choking game.”

Rick pointed to the narrow ribbon of bruises around her neck. “That’s a ligature mark if I’m not mistaken?”

“It is. She died from asphyxiation. The other marks might have been enough to make her pass out but not sufficient to cause death.”

Jake flexed his fingers. “So this started as a game?”

Absently, Dr. Heller laid a hand on the victim’s shoulder. “Smart girls can make stupid choices sometimes. And she might have gone into the woods thinking it was going to be fun when the killer had a different plan all along.”

“Shit,” Jake muttered, thinking about the cave and the candle that had burned through. The killer had not simply dragged her to the cave and killed her, he kept her there for hours and toyed with her. “Any older bruises that might suggest she tried this kind of thing before?”

“No, also no signs of drug abuse. This could have been her first foray into this kind of sexual play.”

“According to her roommate she was smart,” Rick said. “But she did like to party.”

Dr. Heller raised the victim’s right hand and fanned the pale fingers painted in purple chipped at the fingertips. “Debbie found dirt under her nails as if she’d been digging. Maybe she got away and tried to hide. Also embedded in the dirt under her nails, I found skin, so I did scrapings. We’ve processed and sent it off for DNA testing. Looks like she was able to scratch him perhaps a couple of times.”

“Hopefully, she marked him up good,” Rick said.

“Be interesting to know if our killer is in a DNA database.”

“Wouldn’t that be nice.” DNA in a database wasn’t a given. If this guy had never been arrested, it was very possible law enforcement possessed no record of him.