A Madman on the loose?… 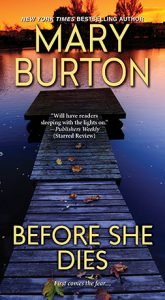 “Identification?” Sinclair knelt by the body and stared into the woman’s face half cloaked by her hair.

“No ID. No jewelry. And there are red marks on the side of her neck. Looks like he got her with a stun gun several times.” Paulie knelt down and examined the hair draping her forehead. He snapped more pictures and then gently moved the hair back. “Have a look at this.”

Sinclair squatted and glanced down. “She’s been tattooed with the word Witch.” The bold letters covered most of the delicate forehead skin, still puckered red and raw from the tattoo needle. “Shit.”

Rokov’s half-baked theory had been correct, but it gave him no pleasure. “She have any other tats or markings?”

“Not on the exposed areas. But there could be other body art under the clothes.”

“I can’t imagine anyone willingly doing this to themselves,” Sinclair said. “But we’ve seen all kinds of oddities.”

Rokov glanced around the room. The flowered wallpaper was peeling off in frayed strips, and the ceiling was soiled with a dozen watermarks. All the furniture had been stripped out, and a shadow imprint on the back wall suggested there’d been a bar at one point. A thick coating of dust covered the room. “Footprints?”

“Two distinct sets,” Paulie said. “The first I identified as Barrows. He was kind enough not to trample all over the floor, which left me with clear impressions of the second set.” Paulie pointed to the window. “The best impression is over by the window, and I’ve marked it with a cone. I’ve got an electrostatic dust print collector. It will pull an impression.”

“Rokov moved toward the footprints carefully to mirror Barrow’s path. “It looks like a size eleven or twelve.” He studied the grooved pattern. “Sneakers?”

“That’s my guess, but it will take time to narrow the brand.”

“The impressions are clear and defined. He walked carefully and with precision.”

“I’m not holding you to it,” Rokov said.

“That’s what they all say. I’ll have a report by tomorrow.”

Paulie snapped more pictures. “Could be an injury or he could have had a wart at one time, and it changed the way he walks. Doesn’t mean he noticeably favors the foot now.”

“So he moved her here,” Rokov says. “Positions her, stakes her, and then moves to the window to stare at what?”

“The river. The full moon. It was a clear night last night. He stops to enjoy the full moon. Maybe he heard a sound.”

“If he’s got a thing about witches, the moon makes sense,” Rokov said. “The full moon has a lot of power in some circles. Stands to reason he’d be drawn to the moon.”

Sinclair rose. “We need to figure out who she is. I’ll head downstairs and put a call into Missing Persons and see what they have.”

“Good.” Rokov turned to Paulie. “Does she have defensive wounds? Did she fight for her life?”

“I’m going to bag her hands. Hopefully, the medical examiner will find something under her nails.”

Rokov knelt by the victim’s right hand and studied the crude stake that had pierced the flesh of her palm. It would have taken tremendous force to drive the wood through the flesh. He wondered if she’d known her attacker. Most murdered women knew their killers. Lovers. Husbands. Boyfriends. Love could turn vicious instantly.

“I wanted you to see her before I pulled the stakes. If I can pull them out now, I can roll her over.”

“I got it.” Paulie slid on workman’s gloves over his surgical gloves and grabbed a hold of the stake. “The floor boards are rotted.” He pulled hard, and the stake wriggled free of the floor and the victim’s palm. Carefully, he moved to the other side and repeated. Then it was on to the feet. The last stake proved stubborn and it took assistance from Rokov to free it.

Paulie laid the stakes out and photographed them. Then very carefully, he turned the body on its side. The victim’s jacket was embossed with the word Magic.