Be Afraid and the Forensic Art of Facial Reconstruction

My love affair with skeletonized bones hasn’t abated since I first started digging into the way they speak for the voiceless victims in murder cases.  I use them as a major plot point in Be Afraid but very differently than I had in earlier books, such as Dying Scream . In Be Afraid I shared what I’d learned about forensic art, in particular sculpting that recreates the likeness of the deceased.

A forensic artist begins the process by stripping the skull so that it is clean of biological material. Then the artist glues small plastic markers on it.  Each marker represents the dept of the skin based upon a standard table of measurements created by forensic anthropologists. Based on sex and race, the markers serve as landmarks that indicate the skin’s thickness at various facial points. 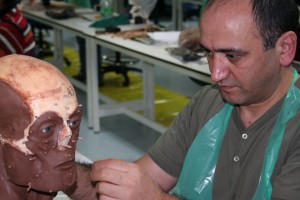 Once the markers are in place, the artist creates the muscle fibers of the face and, finally, the skin.  This is as much art as it is science as all involved are relying on the artist to give the bust human qualities the person would have had in life.

Following is facial reconstructionist Jenna Thompson at work at the behest of  two of Be Afraid‘s Morgan siblings, Rick and Georgis, as she struggles to identify the remains of a child buried as long as three decades ago in Nashville’s Centennial Park–

“The skull was no longer naked. It was now covered in small plastic markers. She’d spent most of yesterday cutting and gluing twenty-one markers onto the skull’s forehead, cheekbones, and chin . . .

She set down her cup and reached for a sheet of transparent paper, which she placed over the demarcated skull.  Carefully, she taped the paper to her drawing board so that it would not shift.

Moving her head from side to side she reached for a drawing pencil. Her work was part science and part guesswork. She had scientific formulas that determined the sides of the eyes and bone markers to help shape the nose and lips but, as with any artist, she made judgment calls throughout the process. Her judgments would add the spark of life that made the sketch all the more real.

Pencil point at the midpoint of the eye, she began to draw the ligaments that controlled eye movement.  She worked for nearly an hour just on the basic underlying structure of the eyes. And then she moved to the lids. The upper lids curved slightly more that the lower and dipped partially over the iris of the eye. Soon a set of colorless eyes stared back at her and she found herself setting down the pencil.

Someone out there knew this little girl and wondered and worried about her her. Someone had not forgotten her.

Soon she would no longer be a little lost girl . . .

‘We’ll find out who did this to you and bring you home. I promise.'”