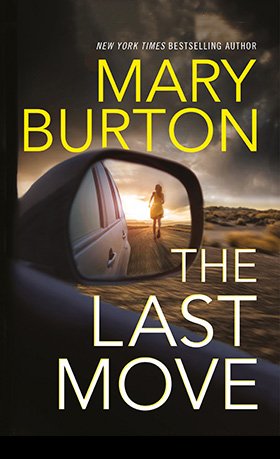 FBI agent Kate Hayden heads to San Antonio to hunt a serial killer. The tricky part? She already caught him.

Catching monsters helps FBI agent Kate Hayden keep her nightmares at bay. Now an urgent call brings her back to San Antonio, the scene of her violent past. A brutal new murder shows hallmarks of a serial killer nicknamed the Samaritan. Tricky part is, Kate already caught him.

Either Kate made a deadly error, or she’s got a copycat on her hands. Paired with homicide detective Theo Mazur, she quickly realizes this murder is more twisted than it first appeared. Then a second body is found, the mode of death identical to a different case that Kate thought she’d put behind her.

Now Kate and Detective Theo Mazur aren’t just working a homicide; the investigative pair is facing a formidable enemy who knows Kate intimately. While Mazur is personally trying to protect Kate, the closer they are drawn to the killer, the clearer it becomes that in this terrifying game, there is only one rule: don’t believe everything you see…

The first of the deplaning Salt Lake passengers appeared, and Mazur shoved his phone in his pocket as he waited for her. A dozen or so people filed off the plane before the short brunette appeared rolling a single carry-on with a worn backpack slung over her shoulder. Her slim figure was partially masked by a baggy black jacket, slacks, and white collared shirt. Her light-brown hair hung loosely around her shoulders, accentuating high cheekbones and a slightly sunburned face.

Walking with Dr. Hayden was an elderly woman. Dr. Hayden smiled as she pointed down the terminal, leaning in to explain something until the woman nodded and walked off. The doctor quickly dropped her gaze to her phone and scrolled through what must have been emails that had accumulated during the flight.

When she looked up, her gaze searched and settled on him. She crossed to him as if they’d already met. “Detective Mazur.”

She barely blinked. “You do.”

If not for the suit, he’d never have nailed her as a Fed. She looked younger than her thirty-plus years, and picturing her small frame chasing a bad guy almost made him smile. “You need to make any stops before we hit the road?”

“No. Thank you. I assume the autopsy is still scheduled for this morning.”

“It is.” He checked his watch. “They’re waiting on us, so when we can get there, they’ll start. The victim was well known in the local business community. She had many friends on the city council and in state government.” He reached for the handle of the suitcase. “I can take that for you.”

Jesus, he hoped she was not one of those hard-assed feminists. “This is Texas.”

“Accent gave it away?”

“When in Rome.” That seemed explanation enough for her, and she allowed him to take the suitcase. He guided her through the busy airport and toward ground transportation and the parking deck. The November sun was already high in the sky, and the weatherman was promising another warm day.

“Different than Virginia, I imagine.”

“I haven’t been home in six weeks. Utah was my last stop. But I understand the leaves are changing in Virginia.”

The hints of warmth he’d seen as she spoke to the old woman were gone. The pleasantry was spoken almost as an afterthought, as if she’d memorized the phrases from an FBI handbook on conversation. Her small stature belied her stiff tone. And if he wasn’t off the mark on his action heroes, she also wore a Wonder Woman bracelet.

But warm and fuzzy wasn’t what he was looking for just now. He needed this case solved.

To Come
← The Hangman Her Last Word →