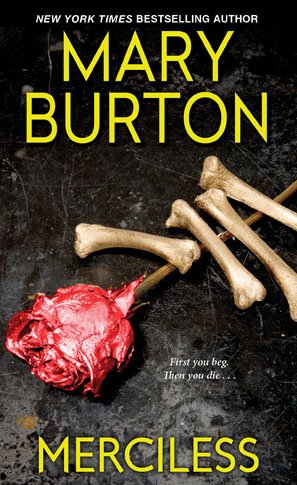 Each skeleton is flawless—gleaming white and perfectly preserved, a testament to his skill. Every scrap of flesh has been removed to reveal the glistening bone beneath. And the collection is growing . . .

When bleached human bones are identified as belonging to a former patient of Dr. James Dixon, Detective Malcolm Kier suspects the worst. Dixon was recently acquitted of attempted murder, thanks to defense attorney Angie Carlson. But as the body count rises, Kier is convinced that Angie is now the target of a brutal, brilliant psychopath.

No one will hear you scream

Angie is no stranger to the dark side of human nature. But nothing has prepared her for the decades-long legacy of madness and murder about to be revealed—or a killer ready to claim her as his ultimate trophy . . .

When her watch beeped and signaled she’d swam thirty minutes she glided into the wall, breathless but totally relaxed. She pushed out of the water and crossed to the bank of chairs where she’d draped her towel. She’d barely dried her eyes and hair when she heard a deep voice call out her name.

Angie stiffened. She recognized the gruff baritone. Detective Malcolm Kier. The cop made no effort to hide his contempt for her and her work. Instantly, she wished she had on her business suit and high heels. She straightened her shoulders and faced him. “Detective Kier. What a lovely surprise.”

He possessed a powerful build. Not more than an inch taller than her, he radiated a raw energy and a don’t-fuck-with-me demeanor that intimidated most everyone. He rattled her as well, but she’d decided long ago that she’d eat dirt before she ever let him know it.

“Counselor. Good to see you stay in shape.” He wore denims with muddied hems, a faded flannel shirt, a jean jacket and scuffed work boots. A leather gun holster peaked out from under his jacket.

“I try. You just roll in from the mountains?”

His grin did not reach his eyes. “That’s right.”

Water dripped from her suit. Drying herself off in front of Kier felt awkward. But the cooling air and her refusal to be intimidated motivated her to slowly begin drying her arms and legs as if she didn’t have a worry in the world. “So what brings you to the gym, detective? Looking into membership?”

His gaze didn’t waver. “No, I’m here on official business.”

She wrapped the towel around her waist, tucked it in place and scooted her feet into waiting flip-flops. How had he found her? And then she remembered that she’d once told Kier’s partner, her sister’s boyfriend, that she swam daily here. “Need an attorney?” she goaded. “I’d be happy to see you in my office. Feel free to call my secretary for an appointment.”

“I don’t need your services.”

“Then why are you here? Bored? Here to rattle my cage a little more?” Kier had been a constant shadow presence since the Dixon trial. It seemed he never missed an opportunity to annoy her.

“I don’t rattle your cage.” The smugness didn’t support the words. “I could care less about you.”

“That why I see you at King’s several nights a week?”

He shrugged. “I like the food. Plus you know I took an apartment across the street.”

“Right. So why is it you always make a point to hold me up in the courthouse when I’m late?”

“How about the four parking tickets I’ve gotten in the last year.”

“The city marks its No Parking zones clearly. You’re being paranoid.” He reached in his jacket pocket and pulled out a theater program. “I’d like you to look at this.”

Annoyance crept up her back bunching the muscles she’d worked so hard to relax. “This is not the best time for me to discuss the arts, detective.”

As if she hadn’t spoken he turned a program toward her. “Do you know this woman?”

She held his gaze not wanting to look and give him the satisfaction that he’d won this little standoff. “Like I said, call my secretary.”

His stare darkened like an angry storm on the horizon, but it didn’t waiver nor did the picture in his hand. “Look here, or look at the station. Makes no difference to me.”

“Nothing would give me more pleasure than to steal a few billable hours from you.”

Asshole. He’d do it. She blinked and lowered her gaze to the program. The young woman’s pale face and blond hair accentuated a high slash of cheekbones. Bright green eyes sparked and her lip curved upward as if she knew a secret.

Angie knew her. “Her name is listed in the program. You can read, can’t you?”

He held the picture out an extra beat then slowly tucked it back in his jacket pocket. “How long has Sierra Day been your client?”

Staring down angry cops and prosecutors was part of any defense attorney’s turf. “I don’t discuss my clients. You remember attorney client privilege, don’t you detective?”

“Tell me about the divorce. Was it nasty?”

“Seeing as you have all the answers why are you here?”

“Word is she and her soon-to-be ex husband mixed it up a few times.”

And then she cut through her own indignation and really thought about why he was here. Kier was a homicide detective and he wasn’t making a social call. What had happened? She thought about the last time she’d seen Sierra. The woman had breezed into her office unannounced and demanded that Angie settle her divorce immediately. Sierra needed cash and wasn’t ashamed to admit it.

“Do you know where she might be?” Kier said.

Sierra could be reckless. “Why the interest in Sierra Day? Is she in trouble?”

“She was reported missing by the West End Theatre manager ten days ago.”

He shifted his stance. “Did her husband ever threaten Sierra?”

“Has something happened to Sierra?”

“And like I said you don’t work Missing Persons. What aren’t you telling me, detective?”

He studied her. “Sierra’s stats match the characteristics of a body we found late last night.”
“Characteristics?”

“That fits Sierra and a lot of other women.”

Her skin chilled. “What else do you know about your victim?”

He studied her, as if wondering how much to give for maximum return. “All we have are bones.”

“Terrifying . . . this chilling thriller is an engrossing story.” —Library Journal on Merciless

← Senseless Before She Dies →