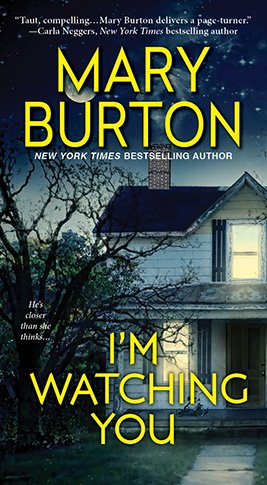 The first kill was easy. The second much easier. No guilt, no remorse, just a rush of adrenaline surging through him as each life drains away, and the pleasure of knowing that their deaths help his beloved Lindsay. And there are so many more who deserve to die…

The first twisted gift to Lindsay O’Neil arrives hidden in a bouquet of flowers. When her estranged husband, Detective Zack Kier, is assigned to the case, Lindsay’s past comes back with a vengeance. Because only Zack knows the dark secret she lives with—or so she thinks. Now nothing can prepare her for the nightmare to come…

And Watch Them Die

Everything Lindsay’s stalker does, every life he takes, is for her. But when Lindsay spurns his gifts, she and those she loves most become targets of a depraved madman whose rage is growing, and who is waiting, watching, closer than she ever feared…

Lindsay’s cell phone, perched on her nightstand, rang just after midnight. She jerked awake. Accustomed to being awaken in the middle of the night, she sat up and grabbed the receiver. “Hello?”

She shoved back her hair and glanced at the clock on the bedside table. Sam had dropped her off over three hours ago and she’d fallen into bed exhausted. “Hello?”

There was breathing on the other end. Normally, when she got late night calls, it was a frightened woman hiding out from her abuser, too afraid to talk. Often she had to coax the women into speaking.

But tonight, she didn’t sense someone in trouble. She sensed danger. Her voice harsh, she demanded, “Who is this?”

There was a moment’s pause. And then the line went dead.

Lindsay checked the incoming number and discovered it was blocked. She closed the phone. Fully awake, she swung her legs over the side of the bed and clicked on the bedside lamp.

A chill slithered through her.

It wasn’t like her to be so easily spooked. She got out of bed, clad only in an oversized t-shirt. The air-conditioning chilled her skin.

Careful not to wake Nicole, Lindsay hurried past her roommate’s closed door and went down the carpeted stairs to check the lock on the front door. She peered out the peephole. Nothing. Then she went to the back sliding glass door. Locked. She moved from window to window, checking them. All locked.

She flipped on the flood light and it shone over her backyard garden. She stared into the yard, looking for any sign of movement.

And yet she had the feeling that someone was watching. Hugging her arms, she stared into the darkness. There was no one there.

She shoved stiff fingers through her hair. This was insane. She was driving herself nuts over what was likely a wrong number. She shut off the back porch light. “Too much caffeine.”

She opened the refrigerator and peered inside at the carton full of leftovers from the bistro. She opened the chocolate cake container and opened it. She pinched a piece. It melted in her mouth. Closing the door, she moved into the living room, switched on a light and sat down. In the silence, she ate the cake savoring every bite.

As she rose to pitch the takeout container in the kitchen trash bin, she spotted the door under the stairs. Behind it was a small storage place where she kept old boxes of pictures. Tossing the carton, she wiped her hands, opened the door and removed the worn box. She carried it to the couch, sat, and dug among the photos, careful to avoid the ones with Zack. She’d never organized or put the photos in an album, but she’d written dates on notes on the back of each.
There were pictures of Lindsay with her friend Joel. They were at the pool, smiling. Joel had his arm wrapped casually around her shoulder. She smiled as she traced Joel’s face. Joel and his dad had been the ones who’d gone back to the house after her mom died and gotten these photos and her clothes.

Going deeper in the photo box, she found a picture of her as a baby. Other pictures of her at swim and tennis meets with her father and mother smiling proudly behind her. They looked so happy. Picture perfect.
And yet behind the smiles, there was tension in her parents’ eyes. Most wouldn’t have noticed it, but she did.

Digging deeper into the box, she found black and whites of her mother as a young girl before she’d married her father. Her mother had had a bright smile, dark wavy hair that set off her hazel eyes and peaches and cream complexion. In one photo, Lindsay’s mother stood with her older brother who was fifteen years older than her mother. He looked to be about twenty-five in this photo. His arm was slung casually around her mother’s shoulders and he wore a sailor’s uniform that accentuated his trim waist and broad shoulders. She had no memories of her uncle expect for the rare story her mother told.

Buried on the bottom of the box were pictures of three-year-old Lindsay holding a baby boy. The child had been her younger brother who’d died of crib death when he was just seven months old. Her mother had rarely spoken about her brother Bobby but Lindsay knew the boy’s death had left a hole in both her parents’ hearts that had never healed.

These stupid mind games weren’t going to change her past. It was what it was. A mess.

She dropped the pictures back in the box unable to bare the sadness. She replaced the lid and put the box back in the closet under the stairs.

Suddenly very tired, she climbed the stairs and got into bed. The sheets felt cold against her skin. Despite the fatigue, her mind was restless.

She reached for the light. She’d searched the house and assured herself that she and Nicole were alone. And yet, she still felt as if someone stood over her.

“Burton does an outstanding job of slowly revealing the character and motives of the players in her dark drama. Creepy and terrifying, it will give you chills.”
– Jill M. Smith, Romantic Times BOOK Reviews