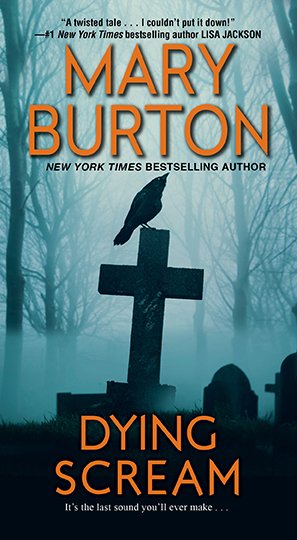 “DYING SCREAM is an absorbing thriller,ripe with twists and turns.”
Bookreporter.com

No one will find you

An aspiring artist. A high-school senior. A stripper. Three women who seemed to have nothing in common except their sudden disappearance. But one man knew them all. Wealthy, privileged Craig Thornton even claimed to love them. And for that, they paid the ultimate price.

No one will save you

When Adrianna Barrington receives an anniversary card from her husband Craig, she assumes it’s a some crackpot’s idea of a joke. After all Craig is dead. But then come phone calls, flowers, messages…all reminding her how much Craig misses her. While Adrianna begins to doubt her sanity, grisly remains are found on the Thornton estate. Detective Gage Hudson is convinced the bodies are linked to Craig. But the biggest shocks are yet to come.

No one will hear you scream

A psychopath has taken up his chilling work again, each death a prelude to the moment when she is under his control at last. And the only way for Gage and Adrianna to stop him is to uncover the truth about a family’s dark past–and a twisted love that someone will kill for again and again.

A twisted tale . . . I couldn’t put it down!”
—Lisa Jackson on Dying Scream

DYING SCREAM is an absorbing thriller,
ripe with twists and turns.”
—Bookreporter.com