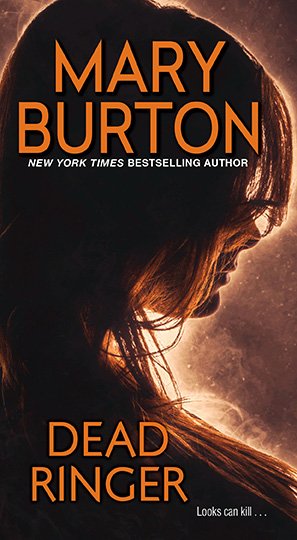 Beside each body, he leaves a simple charm bearing a woman’s name. Ruth. Martha. Judith. The victims were strangers to each other, but they have been chosen with the utmost care. Each bears a striking resemblance to Kendall Shaw, a local anchorwoman … each brutally strangled by a madman whose obsession will never end…

In front of the cameras, Kendall is the picture of stylish confidence. But at night she’s haunted by nightmares in which she is young, alone, and filled with fear. Are these memories-or omens? Despite warnings from Richmond Detective Jacob Warwick, Kendall can’t stop investigating the recent string of murders. She knows she holds the key to catching an obsessed psychopath-if he doesn’t get to her first.

The deeper Kendall and Jacob dig into the victims’ backgrounds, the more terrifying the discoveries. For from the shadows of the past, a legacy of evil has resurfaced. Every murder, every moment has been leading to Kendall. And this time, nothing will stop the killer making her his final victim.

Kendall scanned the crowd. She was good at summing up a setting quickly, picking shots and getting to the root of a story. Her blood pumped with a mixture of fear and excitement. She’d forgotten how much she really enjoyed covering hard news. These last few months she’d done her reporting from the news studio and when she did get out, the stories were soft serve.

Now as the wind cut through her coat and she struggled to keep from sinking into the mud, she realized she’d grown lazy covering the soft stories. Not good. Comfort was the beginning of a slow decline.

“The other news stations aren’t here yet.” There was no hiding the excitement in her voice. “With luck, we can snag an interview before they do. Follow me.”

She knew all the homicide detectives in the department as well as a dozen others from other departments. It was safe to say none really liked her when she showed up at their crime scene, but there was a mutual respect. She hoped.

Kendall’s gaze settled on the broad shoulders of a very tall man. His back was to her but she recognized the scarred black leather jacket, faded jeans and lean body. Jacob Warwick.

He stood next to the river’s edge staring into the distance. He flexed the fingers of his right hand as if they were stiff. She’d heard somewhere that he’d competed in a charity, boxing match last weekend. He’d taken a beating but in the end had won the bout in points. He was a fierce fighter who never conceded.

Tenacity was something she would never fault this man for. It had saved her life last summer…

The Guardian serial killer had taken her to his basement slaughterhouse. He had shot her in the shoulder and she’d stumbled back and fallen to the hard cement ground. The pain had robbed the breath from her.

The Guardian had stood over her, his ax raised high as he’d readied himself to sever her hand from her body. Tears welled in her eyes and she’d only been able to say, “Please, don’t.”

Without warning, the killer had spared her hand and left her to bleed to death, alone, locked in the tiny basement room.

Even now, she remembered the cold cement floor pressing into her back. She’d tried to stand but every move intensified the agony. She’d screamed until her throat burned. But no one had come.

In the darkness, there’d only been the drip, drip of a pipe and the scurry of rats. Time lost meaning and she passed out.

And then the door opened and light shone on her face. She’d thought for a moment the Guardian had returned and she’d balled up her good hand, praying she had strength to fight.

Warwick’s face had loomed over her, his shock as palatable as her own. His large hands gently touched her face. “Jesus, it’s Kendall Shaw. Kier, call for paramedics.”

Immediately, Warwick ran his hands down the length of her arms and to her hands. “He didn’t take your hand.”

What little fight she’d mustered had vanished. She nodded and closed her eyes. The iciness called, beckoned her to let sleep take her.

Her eyes fluttered open. Fierceness mingled with fear in his eyes. She moistened her lips but couldn’t seem to hold onto consciousness. God, but she was tired. Her eyes slipped closed.

“Open your eyes,” he commanded. “Help will be here soon. Hold on.”

Hold on. It sounded so hard. It was just too easy to let her grip slip.

“Listen to me. You are better fighter than this.”

“I’m not.” She’d been fighting for so long—against her mother’s illness and past secrets—suddenly she was tired of struggling.

“Listen you, bitch,” he’d hissed by her ear. “Open your goddamn eyes.”

Bitch had been what had gotten her attention. Her eyes had opened and she’d felt a rush of fire and outrage. “Jerk,” she muttered.

The paramedics had arrived seconds later. They’d rushed her to the hospital and the doctors had taken her into surgery almost immediately. She’d not seen Warwick since.

She could play the badass, diva reporter for everyone else, but Warwick knew under it all she had cracked in that basement room. Shame had her straightening her shoulders until they were ramrod straight. No one, especially Warwick, would ever see her so vulnerable again.

As if sensing her, Warwick turned. Their gazes locked. The scene around them faded and she saw only his intense gray eyes. For a moment she imagined she saw regret. And then just as quickly it vanished.