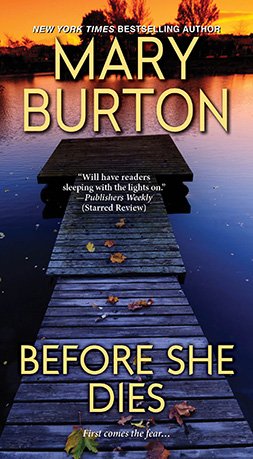 “Burton’s latest romantic suspense will have readers sleeping with the lights on.”

He Is Their Judge…

In death, they are purified. Holding his victims under water, he washes away their sins as they struggle for their last breath. Then he stakes their bodies to the ground, exposing them for what they really are. Witches, sent to tempt and to corrupt…

No one knows about defense attorney Charlotte Wellington’s murdered sister, or about her childhood spent with the carnival that’s just arrived in town. For Charlotte, what’s past is past. But others don’t agree. And as a madman’s body count rises, she and Detective Daniel Rokov are drawn into a mission that’s become terrifyingly personal…

At last, she is within his reach. All his victims deserve their fate, but her guilt is greatest. And with every scream, he will make her see what it means to suffer and repent–before she dies…

Before She Dies Excerpt

She had a power over him.

In this room, alone with her, words failed him. Here he followed her lead, moving with an economy of motion, undressing quickly and falling into bed before reason spoke. Their sex was always urgent. Hot. And it left his heart punching against his ribs.

This time, like every time before, she rose out of bed, his scent clinging to her, and dressed in silence. He knew what would follow. She’d manage a quick fix of her tousled auburn hair, they’d share obligatory, if not embarrassed, pleasantries, and she would leave never suggesting that there should be a next time.

However, this time when she rose, Daniel wasn’t content to just let her leave. He rolled on his side and watched her trembling fingers smooth the bunched cream silk slip down over her naked hips. She moved to the mirror and inspected once well-applied make-up now sinfully smudged and pale skin, crimson with sex’s afterglow.

He wanted her back in bed, curled at his side, but he hesitated to ask. She’d been clear from the beginning that she’d only signed up for good, hot sex. She didn’t want a lover or a boyfriend or anything that involved commitment.

That first time he’d agreed to her terms, counting his lucky stars and fully expecting little more than satisfaction and a pleasant memory. But from that initial release until now, he couldn’t get enough of her. The more she gave, the more he wanted.

And the line she’d drawn between professional and personal had entirely faded—for him.

Manicured fingers slid over the slip as she glanced at the clock on the nightstand, sighed and collected her scattered clothes from the floor.

He made no effort to hide his fascination with her. They’d shared his motel room five other times now but he’d yet to see her fully naked. She had a long sleek form, creamy skin, narrow tapered waist and a nicely rounded bottom. He wasn’t sure what she hid from him, but found the mystery more consuming each time they had sex.

Last time he’d seen the scar marring her side and thought he’d discovered her secret. He’d asked her about it she’d shrugged and said, “I was shot.”

Curious, he’d pulled the police file and read the details of the shooting. It had occurred three years ago. She’d been working late. A client’s hit man had entered her office and shot her because she’d been considered a loose end. Bleeding and alone, she’d escaped to a bathroom and locked the door. The shooter, unable to reach her, had barricaded her inside and left her for dead. It would be another eight hours before she would escape and call 911. The crime scene photos had stirred primal anger in him. Even now he could vividly recall photo images of her blood staining the bathroom’s carpeted floor; the door hinges she wedged free with the tip of her high heels; and her bloodied silk blouse left behind by EMTs.

“Do you think about the shooting?” he’d said as he’d kissed the scar.

She threaded her fingers through his hair. “No.”

Her fingers stilled. “I never dwell on the past.”

If she weren’t hiding the bullet hole scar, then why not take off the slip? Last night when he’d tried to tug it off her, she’d resisted. What else was there to hide?

She slipped on her blouse and efficiently buttoned it. Sliding on a pencil thin black skirt, she tucked in her shirttail and with the flick of the zipper was again all elegance and class. Maybe some old lesson from charm school kept her from stripping totally.

Thinking about that slip and what it hid gave him another hard-on. “Why don’t you stay?”

She found her panties and facing him tucked them in her purse. “We both have early calls.”

“You gave your final summation yesterday. The pressure is off until the jury comes back. Go in to the office late today. You’ve earned it.”

She arched a neat eyebrow. “I’ve never been late before.”

He propped his head on his head. “Be late.”

“Once is not enough when it comes to you.”

She readjusted her pearl necklace so the diamond clasp was again in the back. A smile played with the corners of her lips. “I wish I could stay for an encore. Really. But I’ve got appointments.”

“All work and no play makes Charlotte a dull girl, counselor.”

“All work keeps Charlotte liquid and her bills paid, detective.”

Naked, he rose off the bed and moved toward her until he was inches away. Towering, he fingered the pearls around her neck. She smelled of Chanel and him. “We should have dinner sometime.”

She grinned. “We just had dessert.”

“You’ve got to eat sometime.”

“We drew a line. It has to remain fixed and secure.”

He curled the pearls around his index finger. “The defense attorney doesn’t want to be seen with a cop?”

“Maybe, the cop shouldn’t be seen with the older defense attorney.”

“Three years doesn’t count as older. And I don’t care who sees me with you.”

She untangled his finger from her pearls. “We are judged by the company we keep.”

The wistful, if not sad edge surprised him. She wasn’t talking about him. But who? Another mystery. Another reason to want her.

As she picked up her purse, he pressed his erection against her backside. “Stay just a few more minutes.”

She tipped her head against his chest. Tonight there’d been more urgency in her lovemaking, which he’d attributed to the murder trial’s conclusion. “I can’t.”

“That sounds half-hearted.” Sensing a shift, he pushed her hair aside and kissed her neck. Her sharp intake of breath pleased him.

“I have to go.” The trademark steel in her voice had vanished.

He turned her around and unfastened the buttons of her blouse until he could see the ivory lace of her slip. He kissed her shoulder, her chin, and the top of her breast.

“We have rules about avoiding tangles.”

“Fuck the rules. And the tangles.”

She wrapped her arms around his neck and kissed him. When she broke the connection she was breathless. “I really have to leave in twenty minutes or I will be late.” The whispered words gave no hints of the woman he’d seen on the courthouse steps late yesterday. Swamped by reporters, that woman had been cool, direct, and flawless ice.

The contrasts added to the mystery. “Have dinner with me.”

Her fingers wrapped around his erection. “No time for talking, detective.”

He swallowed, struggling to hold onto clear thought. “You are avoiding the question.”

Her hands moved in smooth, even strokes. “Nineteen and a half minutes.”

Until now she’d called the shots. But that would change. Soon.

Dinner and power plays relegated to another day’s battle, he kissed her as he scooped her up and laid her in the center of the bed. Straddling her, he reached for the package of condoms on the nightstand. Urgency blazed through him. He tore open the pack with an impatient jerk and slid on the rubber.

As she wriggled under him tugging up her skirt, he thought he’d explode. There was nothing else in the world that mattered more now.

When he nestled between her legs, his beeper vibrated on the nightstand. Fuck.

She glanced at him expectantly. “Do you need to get that?”

“They can wait,” he growled.

She gripped his shoulders as he pressed into her. “You sure?”

They both forgot about deadlines, clients and responsibilities.

Before She Dies Reviews

“Mary Burton developed a fascinating heroine in Charlotte Wellington, I became completely invested in her story . . . charisma and powerful masculinity . . . make Daniel Rokov a seductive hero . . . Burton pens a gritty, provocative story . . . the dialogue is crisp and intense . . . a strong supporting cast of characters . . . an intricate plot that hosts a number of revelations . . . a chilling, thought-provoking page-turner that stayed with me long after I finished the closing chapter. I’m looking forward to reading more of Burton’s work.
Leah Franczak, Happy Ever After, USAToday.com

“Burton delivers another page-turner that will keep readers up well past midnight. Strong, relatable characters like Charlotte don’t come around very often, and now she has a story all her own. Her mystery will keep readers guessing until the end.”
RT Book Reviews

“Before She Dies is an electrifying thriller that clearly defines romantic suspense.”
Lori’s Reading Corner

“When I pick up a Mary Burton book, I know I am in for a real treat.  Her idea of romantic suspense is more suspense, engaging plot and creating strong women . . . [She] does thorough research and writes from a wealth of knowledge and experience.  A truly enjoyable ride!”
The  Novel Life