I’m sometimes surprised at the information I end up digging into as part of my stories.  In The Shark, the first of my The Forgotten Files novels, my protagonist, Virginia state trooper Riley Tatum, is an experienced tracker of humans, mostly missing people.  If those people have been injured their condition can add

to the clues about the shape they’re in, where they’ve been, and when. I foune this really interesting, especially the part about blood trails, and thought you might, too.

First though, I want to note that, even though I researched several sources for background for The Shark, credit—and thanks—for the information presented below belongs to David Diaz, who shares it in his book  Tracking Humans: A Fundamental Approach to Finding Missing Persons, Insurgents, Guerrillas, and Fugitives from the Law, written with V.L. McCann. Here goes . . .

Dark Red indicates a lack of oxygen and suggests a cut vein or puncture rather than an artery. Blood would keep flowing unless the wound is treated and would leave smears or drops of blood in heavy vegetation.  Minus lots of ground cover, bushes and other plants, a tracker would see more drops and fewer smears. 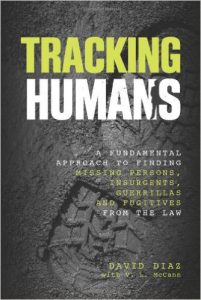 Red would point to the injury involving an artery and “blood would flow in a regular, pulsating fashion” along with the person’s heartbeat and “heavy vegetation would contain a combination of smears, drops and patterns at regular but separated interval patterns.”

Light red blood or blood that appears to include other liquids could mean an abdominal wound.  It might be mixed with gastric, bile, urine or other matter. Patterns would be inconsistent with this sort of wound.

Pinkish blood results from a mixture of air, oxygenated blood and lung fluid and point to a punctured lung. It’s usually foamy.

In this excerpt from The Shark, Riley and canine tracker, Cooper, take the lead in the search for a suspect thought to be connected to the killing of a young woman.

A half hour later, she spotted the outlines of fresh boot prints. The trajectory of the impressions confirmed a westward bearing. The right foot impression was deep but the left shallow, a sign Carter was favoring the leg. His stride appeared shorter, suggesting his pace was slower.

As Riley’s gaze now swept over the lush green foliage, she spotted red droplets of blood clinging to leaves ahead. Like all the markers on the trail, the color and patterns of blood told a story. Dark-red blood implied a punctured vein. Light red meant blood diluted with gastric fluids from an abdominal wound. Pink and foamy signaled a possible chest wound.

This blood was dark red. Unoxygenated. No doubt from the stab wound, which had sliced a vein. Ahead, the path forked and traces of red dotted leaves on both sides.

Close to Cooper’s ear she whispered in Czech, the language he’d been trained to follow while working. “Aport.” Fetch.

Cooper sniffed the ground around the first blood droplets and then around the second set. At the second location, his sniffing increased and his tail wagged. “Good boy,” she whispered.

As they continued, crimson splashes were smeared on more green leaves. The distance between drops shortened to less than four feet. The track was now in its sixth hour and had begun to open his wound. He was suffering, likely angry, and primed to make a mistake if pressed.

She lifted a leaf and touched the blood. Still viscous. Fresh. She raised her boot to step when she heard the snap of a twig. She drew her weapon. Cooper’s head rose and he glared toward the right. The dog watched the woods, but his body language didn’t alert her that Carter was close.

Slowly she crouched, gently pulling the tense dog to her. Her heart revved from steady to overdrive, forcing her to slow her breath and listen to the wind whispering in the trees. Tense seconds passed. But there was no more movement. Only silence.

She could fall back, but that was a gamble. Carter’s odds of escape greatly increased if he found his way out of the woods and got hold of a car. Cooper could track people, not vehicles.

Again, the grainy black-and-white surveillance footage of Carter’s fist pounding the skinny girl jabbed her gut. If Carter escaped, he would double back and drop that girl into a hole so deep no one would ever find her.

Standing, she looked up the trail into the dense brush. At five foot nine, she was tall for a woman, and though she was in peak shape, wrangling an injured, possibly armed suspect off the mountain in the fading light would be reckless. She’d stay close but would not engage, knowing at worst an overnight without food and water would drain Carter’s energy reserves, making him a softer target when backup arrived at first light.

Again, Cooper’s gaze cut right. This time she caught a faint flicker of movement. Someone else was there. Freezing, she searched the dense thicket. Had additional police arrived, or worse, one of Carter’s kin?

Her right hand tightened slightly around the gun’s grip as she waited. Watched. There was stillness. Silence. As hard as she searched, she saw no threat. Finally, Cooper looked away. Mouth closed, he sniffed faster as his tail wagged.

Up the trail, the snap of twigs was followed by a painful grunt. Carter. He was up ahead. Close. Grabbing her cell, she texted an update to the base station and seconds later a reply fired back.

Two deputies are one hour out.

Cooper remained alert and silent, a sign her hours of continuous training had paid off.

Wanting a visual on Carter, she tucked her phone back in her pocket before she and Cooper inched forward through the branches. Monitoring her foot placement and her breathing, she made almost no sound. When she crested the next rise, she spotted Carter staggering toward a tree, one hand on a gun and the other on his bleeding thigh. He pressed his back to the thin trunk, slowly lowered to the ground, and pulled a water bottle from his pocket. He drained the container, then tipped his head back and closed his eyes. He thought he was alone. Safe.

Now it was a waiting game.